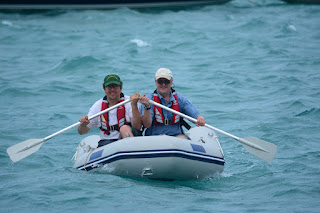 At sea the news of the election had not reached Rona II. The crew therefore
decided to host an onboard election to change the status quo! As such the
authorities at be were overthrown and in a "mutiny on the Bounty"-esque
move. The skipper and watch officer Mr. Parry were cast adrift forced to row
to the nearest landfall, this picture was the last known image of the two as
they battled the North west Atlantic seas. The control of the boat now lies
in a coalition between blue and white watch to attain a majority.
#strongandstable

Popular posts from this blog

August 25, 2017
> Disaster strikes! After arriving in the visitor marina of Le Havre at > 0430, > Rona II drove over a stray rope which had been left in the water. > This tangled around the propeller, causing the Skipper to call for the > anchor to be dropped a mere 10 metres from our intended mooring position. > The crew then had to inflate the rubber dinghy and set world class rower > Theo Darlow to take a line to shore where himself and Dr Sam Wareing > pulled > the boat in. > > In the morning, the afterguard set off to find a commercial diver to cut > the > rope free from the propeller. They located a man named Patrick, who > arrived > to the scene of the incident at about 1500 donning full scuba gear; he > quickly got into the water and began working away at the stern of Rona II. > After roughly 45 minutes of fishing bits of rope from the marina water, > the > crew saw Patrick emerge victorious. Angus Elliman used his
Post a comment
Read more

Rona II and a more modern vessel - "El Galeon" -in the background...

August 21, 2017
The 21st of August on Rona 2 saw the Mayans on mother watch again. Leaving the hard job of motoring from Swanage Bay to Portsmouth to the Vikings and Mongols. Luckily moods were high as last night around 10 pm Ed Clark's parents kayaked out, whilst we were at anchor in Swanage Bay in the heavy rain to see their precious child and drop off a care package of Ed's mums famous flapjacks. Something that the crew has been looking forward to eagerly all day. The day also consisted of a trip up the mast for crew member Theo Darlow to retrieve the burgee and fix some minor problems with the head of the mainsail. He later commented, "it's a lot higher than it looks", yet maintains he wishes he'd been able to go higher. Whilst Theo was up the mast, occasionally, dropping things on his unsuspecting crew who had winched him up the mast, Rona 2 was skillfully steered up the Hamble River to Universal Shipyard. On arrival at Universal the torn spi
Post a comment
Read more